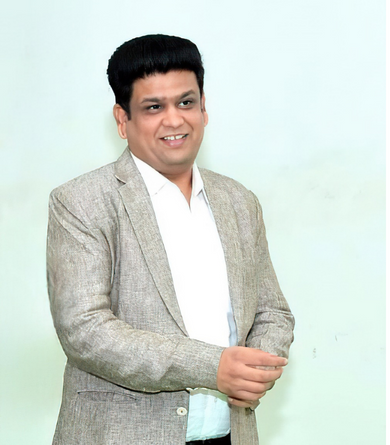 Suyog Jain grew up working alongside his father Shri Dharamchandji Jain in their family tyre shop. Growing up in a joint family, Suyog learned the importance of family values and support from an early age. From a young age, Suyog had a passion for cars and mechanics and knew that he wanted to pursue a career in the automotive industry. However, while his father’s tyre shop provided him with a solid foundation in the field, Suyog wanted to explore new areas in the

industry and work on different types of vehicles, not just cars and bikes.

Suyog’s father, a hardworking and dedicated man, encouraged his son to pursue his dreams and provided him with the resources and support he needed to succeed. Suyog worked hard and learned everything he could about the tyre industry, quickly rising through the ranks of the family business. He was soon appointed as the manager of the shop and was responsible for the day-to-day operations.

Despite his success, Suyog knew that there was still more out there for him to achieve. He had always been fascinated by lubricants and how they worked to keep engines running smoothly. So, he decided to branch out and start his own lubricant business with his older brother Samir Jain.

It was a risky move, but Suyog was determined to make it work. He put everything he had into the business and worked tirelessly to build it from the ground up. He quickly gained a reputation as a knowledgeable and skilled lubricant expert, and his business began to flourish. Alongside his brother Samir, they named the company Masterline lubricants Pvt Ltd.

Suyog’s hard work and dedication paid off when Masterline lubricants Pvt Ltd became one of the largest lubricant companies in the country. Suyog proved himself to be a great leader and an excellent communicator, he was able to motivate his team and work with them to develop new and innovative lubricant products. He was able to provide employment opportunities to many individuals, and Masterline lubricants Pvt Ltd became a socially responsible company. Suyog’s joint family values helped him to keep the team united and motivated.

Suyog’s story is a testament to the power of hard work and determination. He started from the bottom, working at his father’s tyre shop, and through his own efforts and dedication, he was able to achieve success and become a respected leader in the lubricant industry. Suyog’s journey from the tyre shop to Masterline lubricants Pvt Ltd is an inspiration to many young entrepreneurs, showing that if you believe in yourself, have a supportive family and a supportive team, you can achieve anything you set your mind to.

“Success is not final, failure is not fatal: it is the courage to continue that counts.” – Suyog Jain.